The internet web-site World of Passport Stamps is a catalog of contemporary and historical passport stamps from around the world. Choose the country from the list or map to see the passport stamps that are in our collection.

In its original version of the web site World of Passport Stamps  was founded in 2001 and its founder was Mr. Cezary Golik. These were the times in which the internet in Poland was in infancy. Site gained great popularity and on its topic there were also articles in newspapers. 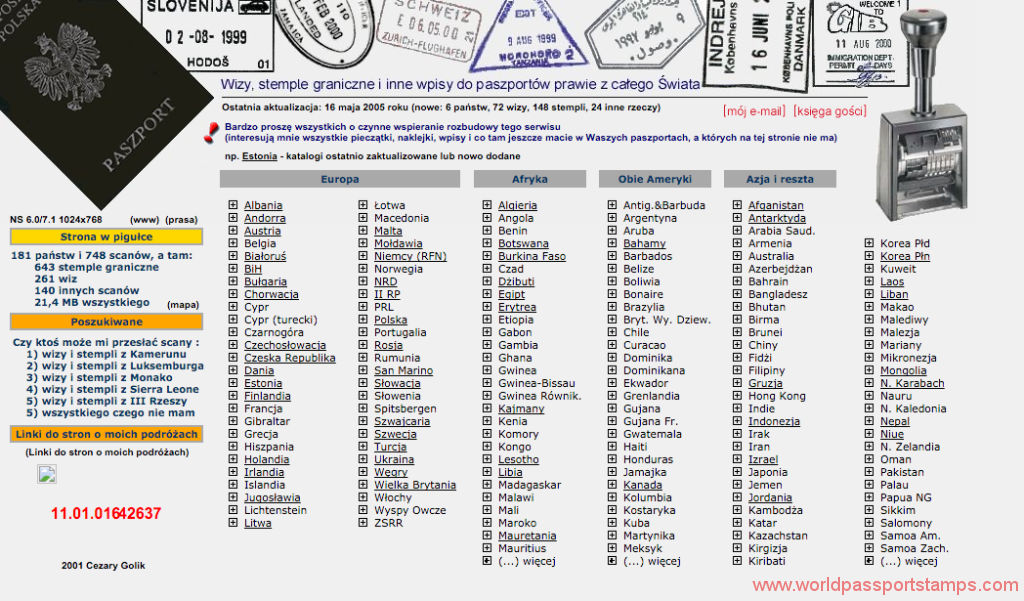 Service was systematically supplemented by new stamps, visas and other documents. In his first installment web site about passport stamps operated until 2005, and the author managed to gather 643 stamps border, 261 visas and 140 other scans. Since then, the site has not been updated, and the technology, in which was made, slowly became obsolete. Visits to the old version of the site began slowly decrease.

Keeping in mind the popularity of the old version of the site, in 2014  I wrote a message to the author, if he agreed on the renovation and reconstruction of that site. By courtesy  of Mr Cezary Golik, after obtaining the agreement, on condition of descriptions and sources from that site,  works on a new version have started. They lasted over a year. All sources and descriptions from the previous version have been preserved. The current site also refers to previous appearance (map, columns with the list of countries on a gray background).Site enriched also in English and Russian language versions and was placed on a professional server. Thats why, the memory has been preserved, and collection of stamps of the world may be increased. You can continue to actively participate in the life of of the page by sending new stamps through the form.

By continuing to use the site, you agree to the use of cookies. more information